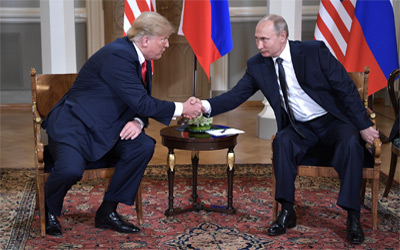 The highly anticipated summit between US President Donald Trump and Russian President Vladimir Putin - their first ever summit - took place in Helsinki Finland on July 16th, 2018.


Prior to the summit, the mainstream media in the US was highly sceptical about the meeting.


Following the summit, the mainstream media as well as many Democrat and Republican politicians were hysterical with negativity toward President Trump, branding him a traitor and even blaming him for treason.

Below is an interesting take on the summit - a rational one - in which Tucker Carlson asks some very basic questions about the summit and the reaction to it that no one else in MSM seems willing to ask. A real treat is that Prof. Stephen Cohen is featured in the video. Prof. Cohen is a Russia expert with decades of experience in Russia relations.


Here is another Devil's Advocate to MSM, with actual opposing viewpoints being debated regarding the Trump-Putin summit. Check out MSM, check out non-MSM, then make up your own mind.

Pat Buchanan is a widely-renowned expert analyst with decades of experience in matters of foreign policy. Pat's opinion should always be considered on all foreign policy matters. CLICK HERE for Pat's analysis on the Trump-Putin Summit.

Tennessee Congressman Steve Cohen tweeted suggesting that the US military should perform a coup to overthrow President Trump.